This blog posting is all about how I take the high speed shots I occasionally post on flickr, an example of which is below.

High speed photography usually involves freezing the motion in a shot either with a very fast shutter speed or by using speedlights\strobes to capture the movement. The issue with the former method is that it requires a lot of available light to get anywhere near the shutter speed required to remove motion blur, there are very expensive studio setups that can give enough constant light or you can try outside on a very sunny (but windless) day. Given the weather in the UK, where I am based, if I waited for a sunny day I’d be very old and grey before I could take any shots. My preferred method uses a couple of off camera flash units to provide a low power short duration burst of light, this combined with a long shutter duration can be used to freeze a motion in a shot.

The first thing you need is a room that is relatively dark, you need enough light to see by, but not so much that you could take a shot with your camera and see anything in the recorded image. Also required is an off camera flash gun and some way of triggering it, I prefer to use wireless triggers for this as it means there aren’t cables draped everywhere. I like to use two or three flash units for most of my shots as this gets enough light on the subject at a relatively low power setting on the strobes. A good solid tripod and head is also needed, along with a shutter release trigger. Lastly, and most obviously, you’ll need a camera and lens, you’ll need something that lets you set up in full manual and a lens that has a reasonably short minimum focussing distance, I’ll get to the settings I use further on in this post. You may also want to get hold of some backdrops, I like to use white, as I think the high key effect works well in this type of shot, but black and any other colour will also do.

The equipment I currently use is:

So how does this work? The principle behind a slow shutter speed short duration flash shot is quite simple. It works because flash units  set to low power  only emit light for a very brief period, at 1/64 power the duration of the light is around 1/16000 of a second, this is double the fastest shutter speed my 50D can achieve. The camera shutter is opened and because the room is dark records nothing but black, when the flashes are fired whatever is happening in the shot is recorded.

I usually opt for an aperture between F11 and F16, the aim is to get a reasonably large amount of the shot within the depth of field. I find a shutter speed of 5-8 seconds is best, this is long enough that you have time to get yourself set to drop\move whatever you want to capture, but not so long that you are waiting for a ages to view the results. I normally set the flash power to around 1/64. You will almost certainly need to juggle flash power and camera aperture to reach the sweet spot for a) enough light and b) enough depth of field. Increasing the number of flashes units will make the process of getting the light right much easier, 3 or even 4 units give a much better balance of flash duration and amount of light.

Bringing it all together

Get the camera on the tripod and positioned in the correct place, set the lens to manual focus and use Live View to compose and ensure that the subject is sharp. Put the camera in manual mode and set your aperture to F13 and shutter speed to 5 seconds. Plug in your shutter release and make sure that the cable is safely routed so that you won’t trip over it.

Get the flash guns and wireless receivers connected and mounted on feet or flash stands, I normally have one aimed straight up the backdrop to provide some fill light and the other above and in front of the subject pointing down at around 45 degrees. You will have to experiment with how this works for you to get the optimal position.

If you are dropping things into liquid I recommend at least one towel is close at hand, you WILL make a mess and this WILL end up on something expensive if you aren’t careful.

With everything in place and the lights off, open the shutter on the camera but DO NOT fire the flash guns. When the shutter closes, review the image to ensure that all you can see is black. If it’s not, try and make the room darker and\or go for a higher F-Stop, I would avoid going over f18 or you will start to get degraded image sharpness with most lenses. When you have made your adjustments, retake the image and repeat until it is totally dark.

When you are satisfied that the image is dark, open the shutter again and this time count in your head to 3 then fire the flashes, don’t drop anything in or have moving objects in the frame at this point. When the shutter closes review the image, you will want to make sure that you are happy with the focus on the subject and that the lighting is correct. If it’s too dark, adjust the flash power accordingly. Don’t make multiple changes to the setup at once, often you will find that you only need to change one thing to bring the image to where you want it. Repeat taking the image until you are happy with position, lighting and focus.

You should now be ready to take your first shot, you will probably need to make a few attempts to get the timing right. Review your shots between each attempt to determine if you are firing the flash units at the correct time.

I’ve included a setup shot below, this was taken when I only had one flash unit and was using my Sigma 18-250, I’ll be updating this the next time I do a high speed shot. 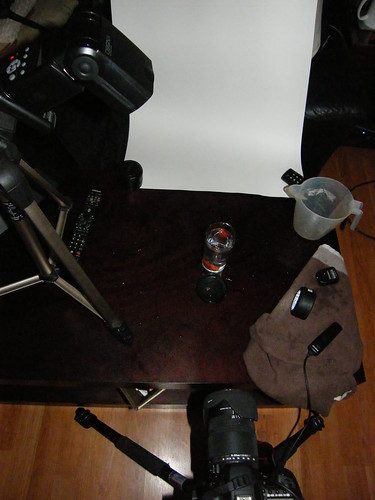 If the above seems a bit of a faff, then there is a quicker method that can be used. This doesn’t use a long shutter time, but simply flash sync speed(1/250). The setup for this is identical to the method above apart from the shutter speed and you will be triggering the shutter AND the flashes at the same time; when your object is creating it’s splash. This method can produce some good results, especially if the room is dark enough that without firing the flashes you get a black image, but there is often motion blur  evident which can compromise the quality of the shot. These also aren’t “true” highspeed shots.